Our time in Sydney is now over. Our journey in the red centre of Australia starts with a flight to Alice Springs.

At 5:30 Petra and I stood up. As usually if we start early to the big trip I was awake long before the alarm clock rang. At 6 o'clock we woke up the kids, Jann asked for extra sleep time. We already prepared everything on the evening before (Petra nearly got the crisis until she found out to the general relief that we can bring two pieces of hand luggage with 14 kg in total). So the breakfast and the final cleanup was rather efficient. Starting 6:50 Jann asked me all the time when the taxi will finally arrive. "At 7 o'clock." As we drove with the taxi to the airport Jann asked: "Papi, why was the taxi so late?" "The taxi was very punctual, it came exactly at the ordered time."

And so we say goodbye to Sydney where I spent now 10 month in total. The company closed the small operations center and moved it to California where recently a new office was opened. Together with Andi, who was down here many times and helped to build it up, I emptied on Monday the office. We got a bit nostalgic. And our picture from the last beer at "Lord Duddley" caused many similar reactions in the company chat.

But at the very end Yin waited for us at the airport with a small present. We were dance partners in the Tango class during my first stage in Sydney and she showed us the Chinese side of Sydney. We will also miss her.

After nearly three calm flight hours we got to the very heart of the continent. We got the rented car and went to the city. Or better town. With 24'000 inhabitants is the settlement grown out of a post and telegraph station in the middle between Adelaide and Darwin at a passage through the MacDonnell range still rather easy to overview. We went to our accommodation and then to the town centre. At 3 o'clock we had a late lunch and at 4 o'clock we were ready again.

Shortly after a bus picked us up and drove us to the "Kangaroo Sanctuary". In the bus the BBC documentary "Kangaroo Dundee" prepared us to what we have to expect. "Brolga", tall and gaunt, welcomed us and started his awareness programme: what do you do if you see a dead kangaroo at the side of the road? Please get out of the car and check if there is still something alive in the pouch. And if there is, so please take the joey with you. With a t-shirt you may form a pouch where it can be put into. Then carry it all the time in front of your belly, wherever you go. You are now a temporary kangaroo mum until you reach the next town where you can hand it over to volunteers. Just give it a bit of water with the hand, no milk. Then he fetches such a small cuddly creature out of his pouch. Currently he raises ten of those. Each year 350 of them end up in Alice Springs. Mostly due to the mother being killed in an road accident. That happens again more often in the current dry time because then the greenest grass is found next to the road. The cause is that also water is produced when fuel is burned. Sometimes also Aboriginal hunter bring a joey who's mother they killed. 30 volunteers in Alice Springs help him and raise at home the kangaroo orphans. When they are big enough to not need the pouch any more they get into a compound and if they do not need milk any more they go back to wilderness.

Just those stay back which are too much handicapped so that they cannot hop off a Dingo or are too used to man so that they will walk to a hunter instead of fleeing him. So he got once called by Aboriginal kids who raised hunting orphan and playmate got so big that their uncles wanted to eat it. For such animals "Brolga" build his sanctuary, 76 ha bush land dingo safe fenced. That means 2.4 km fence which is more than 2 m high and 1 m below ground. Reinforced with electricity. The dingos strive and howl around it each night.

Then we could go inside. Jann was the first one who got to hold ta joey. Then everyone could be kangaroo mother for some time. But as child he had to hold it sitting on a chair. The adults could hold it during our small hike in the compound and pass it forward. I never got it as I had my personal kang..., ehm, Kiara to carry. So I also could not pet one of the kangaroos which came over to watch our group and got individually introduced. "Brolga" told us a lot of interesting things about kangaroo, but also a lot about Roger.

The male kangaroo which passed away last December was the big star of the sanctuary, if not even a national symbol (there will be soon an exhibition in Canberra). He was part of a first group of joeys which were raised by "Brolga" and was kept because of an injury. In the compound he was then the alpha male for many years until he got beaten up by his son. Male kangaroos are gifted in kickboxing. That is how they decide on the pecking order. An upright standing male is over two meters high and about 90 kg. The females only get about half that big. And a human has a similar posture than a male kangaroo challenging a fight. And so Roger saw in "Brolga" always an opponent. "Brolga" of course evaded the fight and run away, but still he ended up three times in the hospital. If there were visitors they had to put him into a separate compound. Lately they desexed all males because this makes them less aggressive and they do not cause problems any more. This aggressiveness is also the reason why it is forbidden to have kangaroos as pets.

We very much liked the visit in the Kangaroo Sanctuary. Kiara too, even though she did not want to go there.

On Friday we had a more calm day with sleeping long. First we visited the small but excellent museum of the Royal Flying Doctor Service. In the afternoon we strolled through the mall and were shopping. Then it was pool time! With sunshine over 20° C the weather is very pleasant and the pool in front of our accommodation was very apealing. Only go the temperatures at night time to lower one digit range and so the water is quite cool. I stayed out from the beginning, also because I do not like to swim very much. The only one really staying in the pool was Petra, the kids were fast out again.

In the early evening we visited the Olive Pink Botanic Garden on the edge of the town. Kiara refused again completely. And so we did not hike the hill where there was surely a nice view over the town. I carried her halfway through the park until she recovered and could again walk by herself. Petra had to care for Larina which run around enthusiastically, but did not feel bound by the path. There are snakes here. So we adults skipped the learning part of the Botanic Garden... 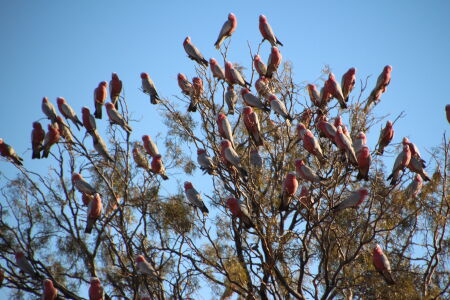 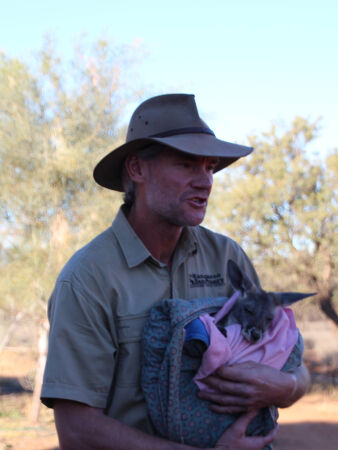 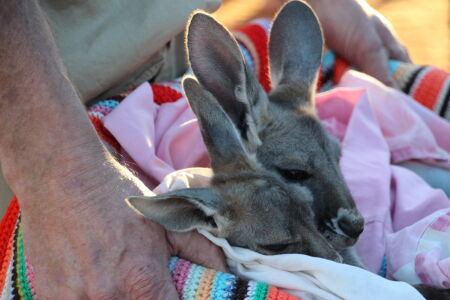 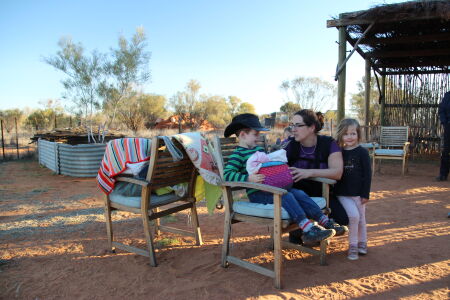 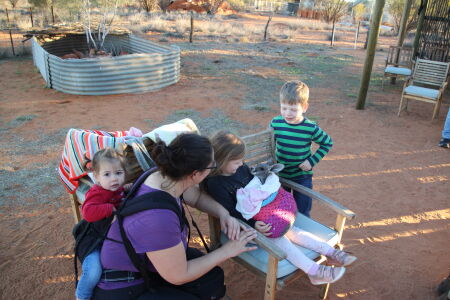 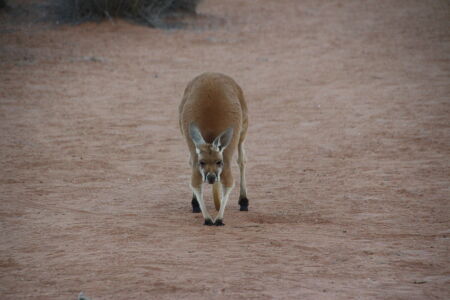 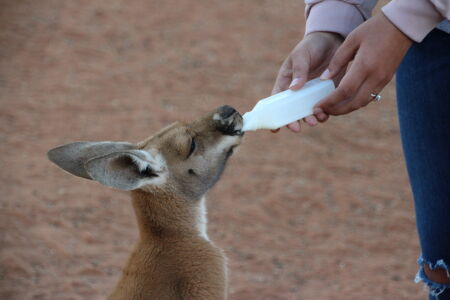 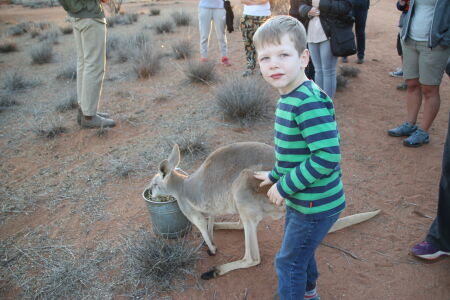 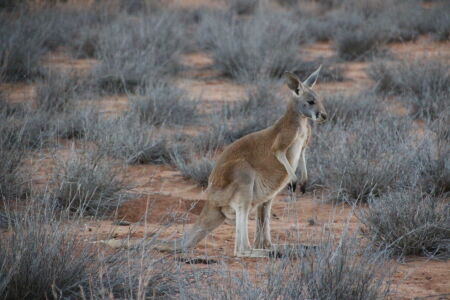 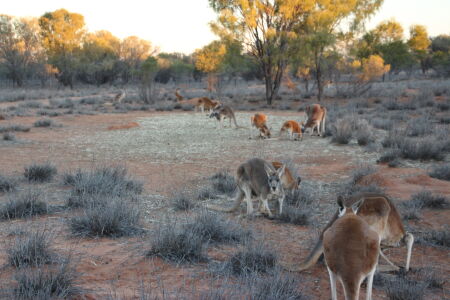 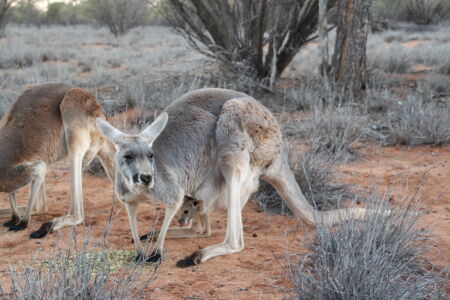 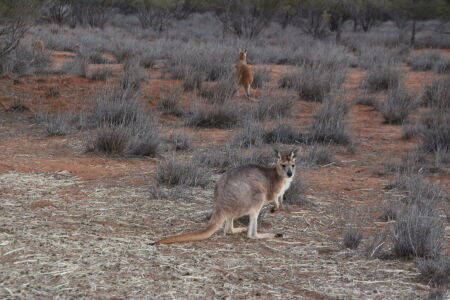 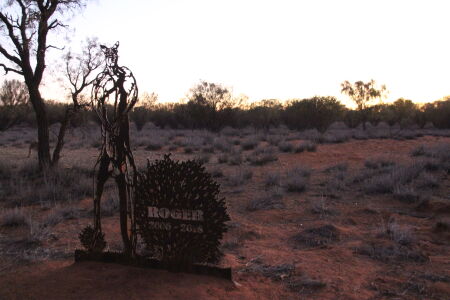 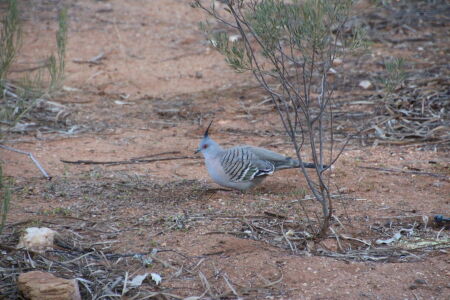 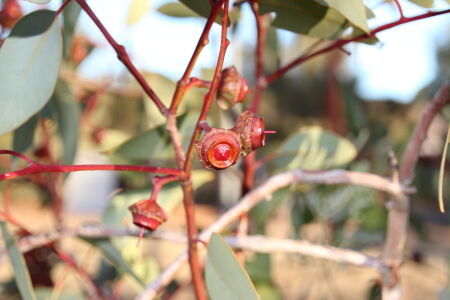 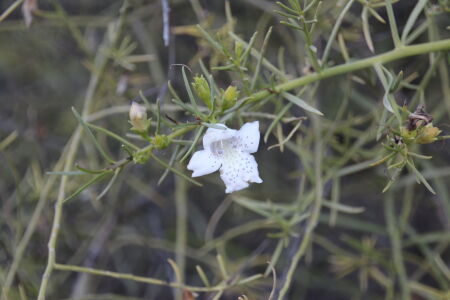 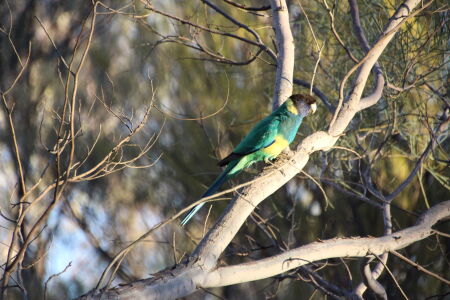