We arrive on late saturday morning in Broome and get the last free lot on a camping site a bit outside of Broome next to the Cable Beach. Our lot is slim and long, there does not fit much in. That is why it is still free. We are unsure, but then book for two nights.

We go then first to the town for shopping. All important things are very close: beach, dune, Chinatown, shopping mall, airport, shopping mall. Chinatown consists on two streets with restaurants and shops and is kind of the centre of the town. Earlier the Japanese lived here, but in World War II the barrier has been renamed. The airport has fortunately not that much frequency so the noise from the low flying planes is only a temporary problem. On the west coast also has a pearl industry and Broome is a centre of it. But everything except Chinese pearls are beyond our holiday budget.

In the afternoon we set up on the camping site. The space is more sufficient than expected. Jann says something about belly ache. I promised him also a huge sandbox and thus we go to the close Cable Beach where we stay until sunset. The kids are happy in the sand. With Jann I run to the sea which is still quite a bit away as the beach is very flat. He enjoys it. Also later when we cover the feets of dad and mum with sand. When only my toes are looking out of the sand hill he got a genius idea: with the toy shovel you might hit the toes deeper into the sand!

Jann's defacatation smells strongly, but in the night it really starts: Jann is vomitting several times, Kiara later joins in. We cancel the Sunday programme and stay at the camping. I do mediative activities like shaking Coca Cola. It is the most easy to get medicine on this planet. Petra is busy with washing. Jann is somethimes better, sometimes worse. Whatever he eats returns. Kiara's state is better.

There is no problem anymore on the second night. We decide to stay a further night and discover now on Monday a bit the local attractions. We go to a crocodile/wildlife park a bit outside of Broome. But it has impossible opening hours of 2pm to 5pm. The nearby bird park at least opens already at 10am, so we admire the feddered beauties from Australia and the rest of the southern hemisphere. And in between there are a few very rusty tractors.

We again go shortly to town to get some groceries. Petra feels a bit sick. For the pick-nick we drive to Gantheaume Point. There is a lighthouse and romantic cliffs. You could get envy habitants of the keeper's house (now it is more a villa): lonely with three sides to the sea (at least if you ignore the tourists walking by). And if you get bored, the town and the airport are in bicycle distance. Below the water there are dinosaur tracks, but they are only accessible if the tide is very low. The kids are sleeping and Petra does not like to eat nor to walk. So I eat alone and do a short discovery and picture-taking hike. Now Petra can see to how it would have been. Then we go back to the camping site and Petra retires.

I go with the kids to the beach. Both are really better now: they are excited and run around and enjoy themselves in the sand. Kiara even forgets that she is wearing her unloved hat. With both I go down to the water. Kiara is running all the way by herself, also into the water while ignoring Janns' warnings. One bigger wave is too much for her balance, but there is dad.

Tomorrow Petra would like to continue driving. We will see. 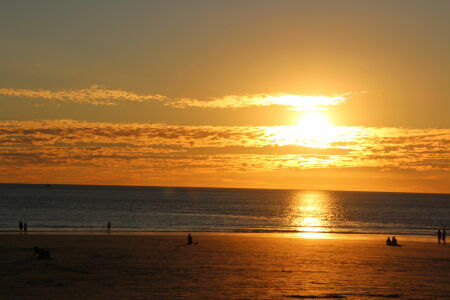 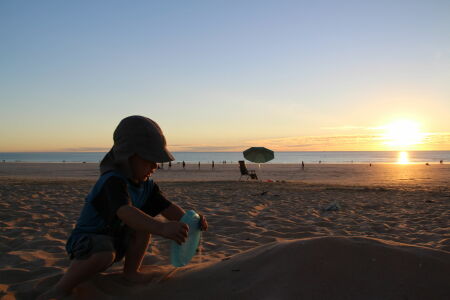 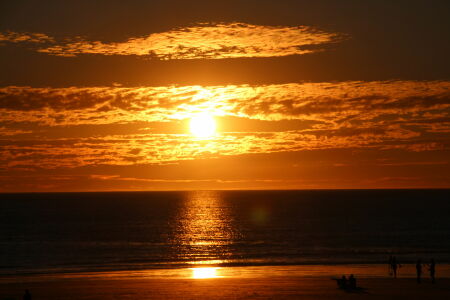 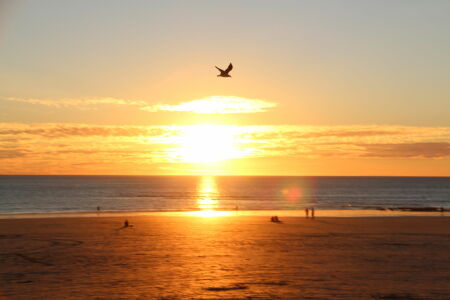 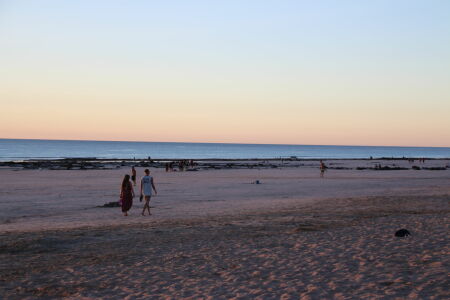 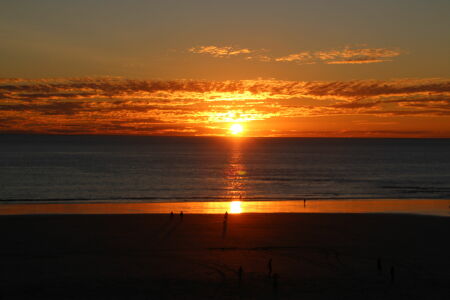 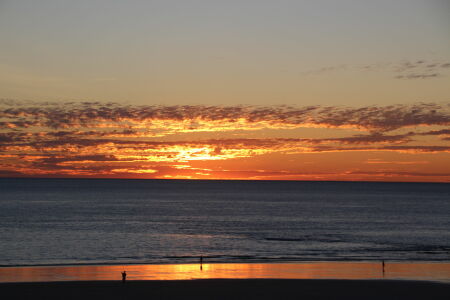 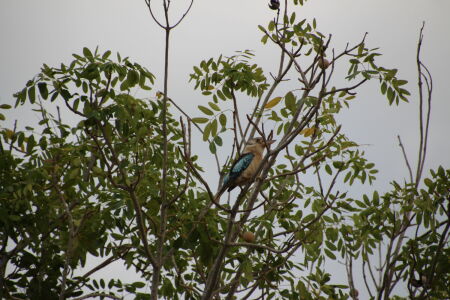 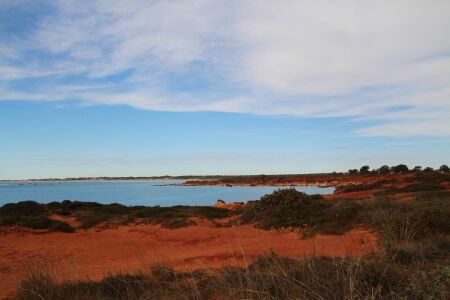 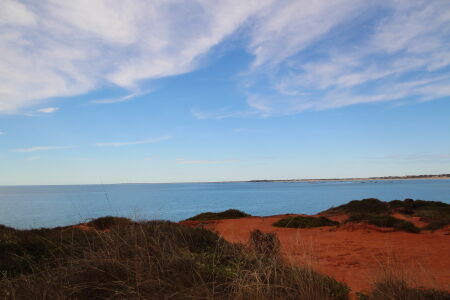 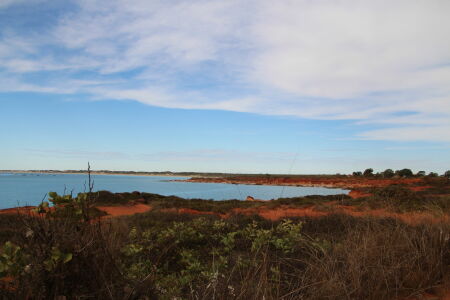 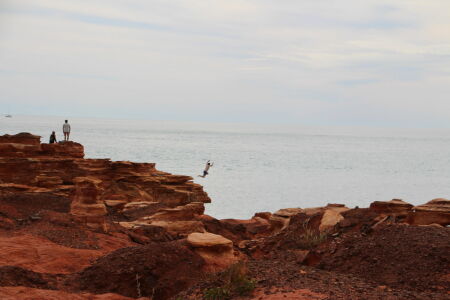 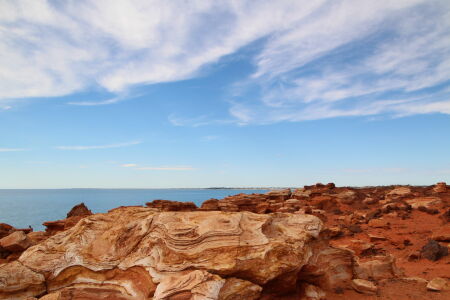 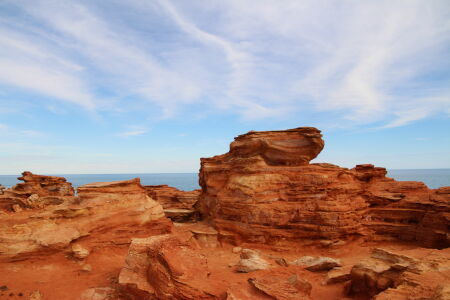 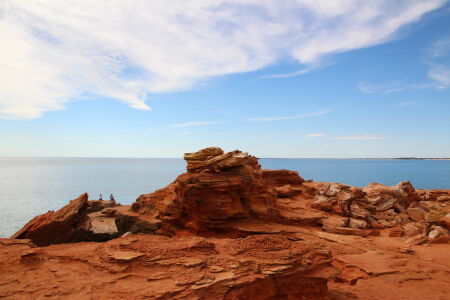 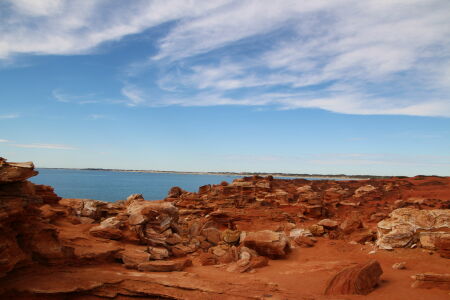 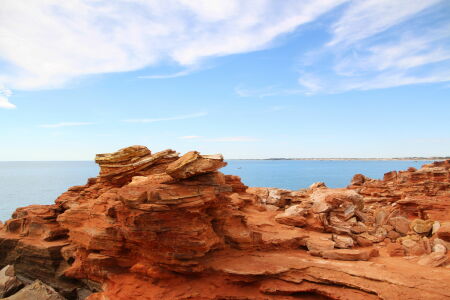 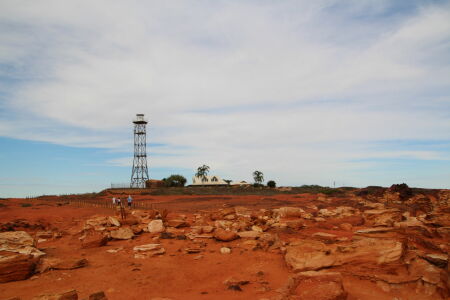 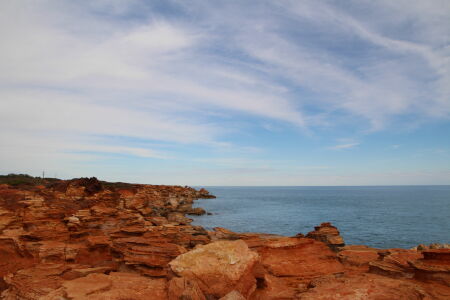 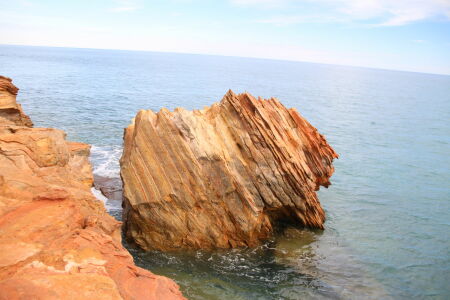 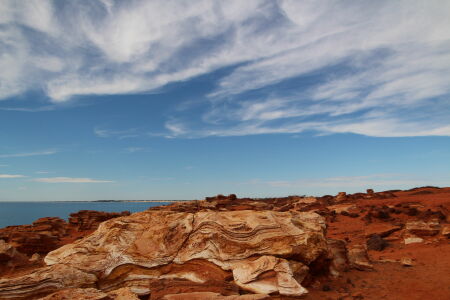