We aim now for Broome at the Indian Ocean. We only need to go for another few hundred kilometers. Because of the kids we do that in several shorter parts. On Thursay we start quite late. Kiara gets a mobile with wooden pieces to play and the childrens songs help too. We stop then already at about 3 o'clock in the afternoon in Fitzroy Crossing.

The caravan park is part of a lodge. A wallaby already awaits our arrival. Later a few more come. Then Petra discovers a black cockatoo high up in a tree. When flying he shows with his red tail his full beauty. We have already seen white cockatoos a few time.

There is also a pool, as there was always in all locations where we stayed so far, with the exception of the Natinal Parks. We have time and we would like to do something nice for the kids, so we go to swim. A complete failure: the water is too cold. At least for the kids. Fur us it is refreshing, but our kids are used to 32° warm water from the baby swimming back home. They now both are shivering. So we are out again quite fast. During the day it gets up to 30°, but still at that time of the year in Switzerland it would be deep winter. In the night it also gets cooler, so around 15°. We have to pay attetion that we do not freeze in the tent.

Friday we start with a hike in the Geiko National Park. It is a bit more than two kilometres along the Fritzroy River in the Geiko Gorge. The river we only see at the end of the hike after we wandered along the rocks and the flooding plane. And then we need to go back all again. Jann marches nicely, only sometimes he needs some motivation. Kiara is as usual sitting in a carrying backpack on my back and is regulary throwing down her hat.

Thenn we are again on the road. The landscape we pass in these two days is mostly flat. Landscape features like rocks or distant small mountain ranges are few. The bush is more think, and if it is light, then the termite mounds stand think. Maybe they ate away all trees...

The kids sleep. Also we are tired from the hike and change the driver seat more often than usual. The kids sleep during lunch, but shortly after Kiara starts to scream. Nothing helps: changing the nappy, giving something to eat and to dring, cuddling with Mami. But then Petra sees the reason: two teeth are breaking through. Jann does not care, he only wants to sleep. Despite the screaming we put Kiara back to her seat and continue driving. In a very short time she falls asleep.

We stop on the next crossing of the Fitzroy River: Willare Bridge. On the green in front of the road house stands a bull monument. Oh, the monument is feeding! That model example of a bull stands in the very middle, rectangular and in perfect feeding pose. It just looked too artifical. We stay here. Judging from the manure the cattle also stays here sometimes. Jann is very fond of "Guschti" (that is the name of the bull of his grandfather), thus Petra takes him to see that animal again.

It is a bit early in the afternoon and Petra asks what we should do. We are on vacation, thus nothing. OK, we get some icecream and we did not yet finish it as the next small disaster rises its head: we locked the key into the car. He lies innocently in the front passenger seat. At least the booth door is still open. But from there we cannot go to the front as there is a mesh installed on which the fridge mounted on it. That would be quite some work to remove everything. I think we could get the key out with a fishing rod throught the mesh. We are here in barramundi country and this there should be some amateur fisher among the campers. In the mean time Petra tries to draw up the button of the lock with a metal stick with a hook. It is a bit less than a metre and belongst to the tent. My first victim has indeed two fishing rods in the luggage and looks at the problem. Unfortunately the rod does not completely pass through the mesh as the second ring guiding the string is too big. At the moment when he went to get a hook and a tape to connect our metal stick to his rod I got an idea: "Petra, try to move the crank of the window!" And look, the window lowers and we can unlock the car.

During dinner the cattle enters the ground and when I go to toilette during the night they camp beside it. 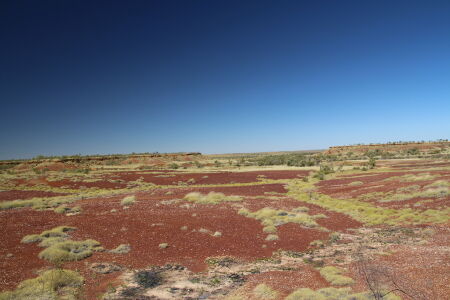 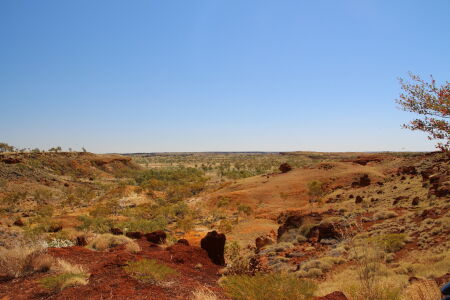 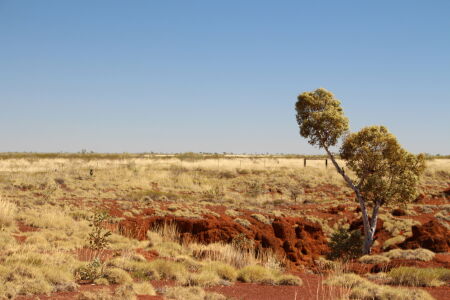 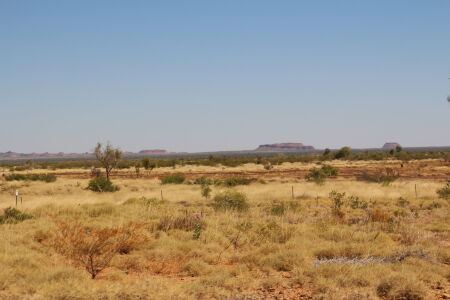 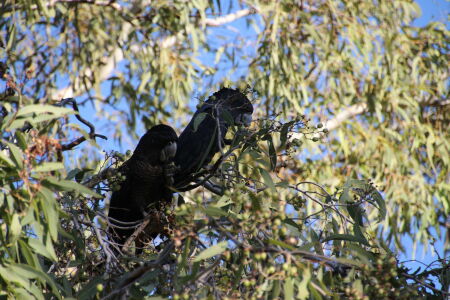 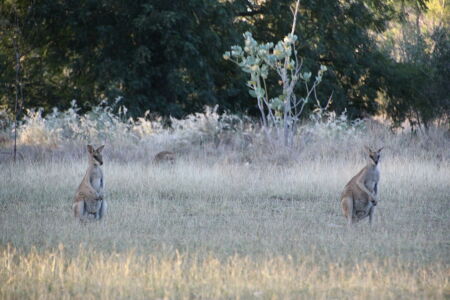 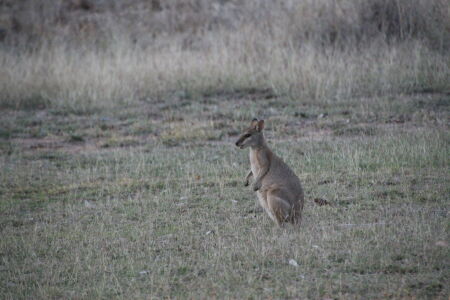 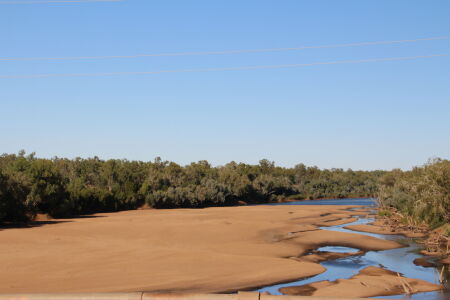 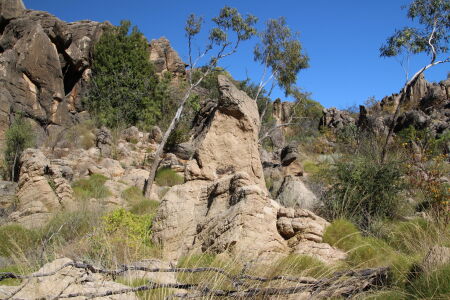 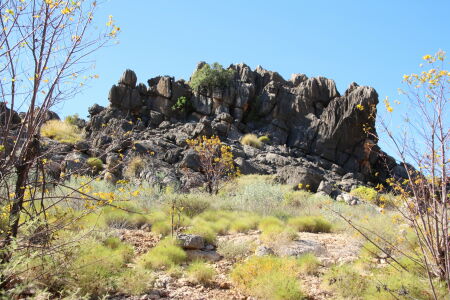 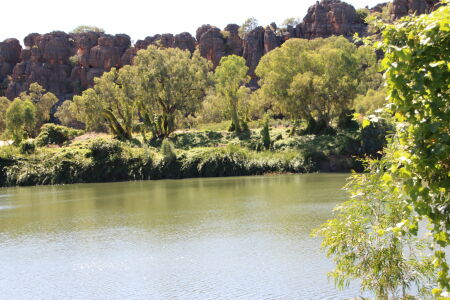 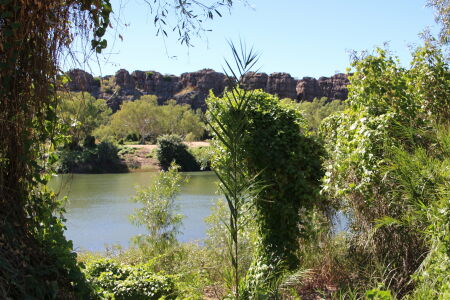 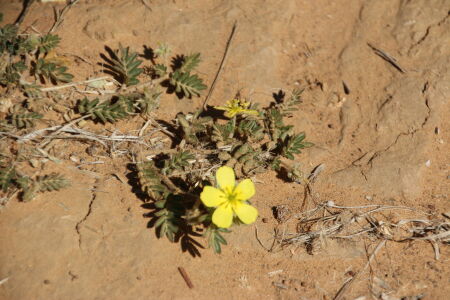 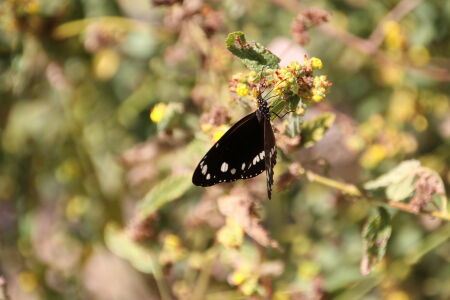 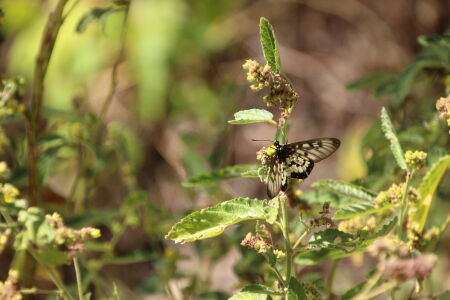 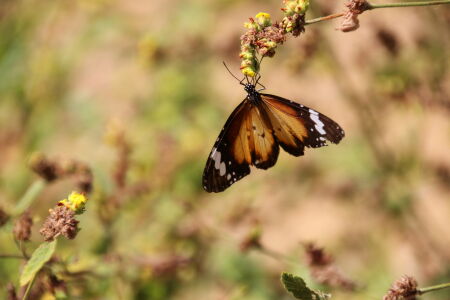 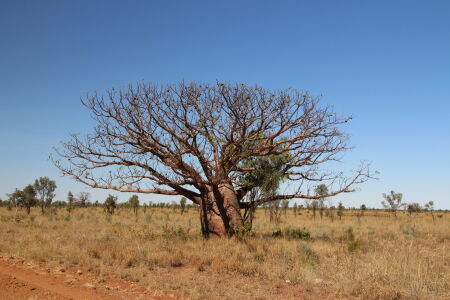 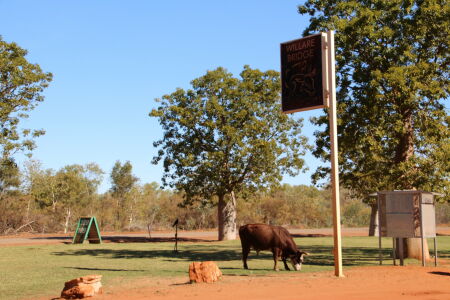 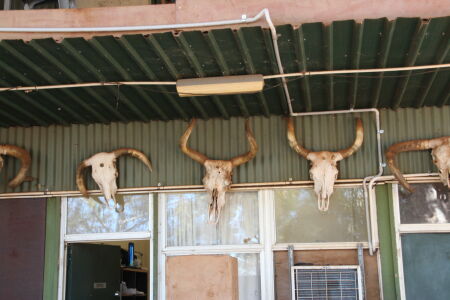 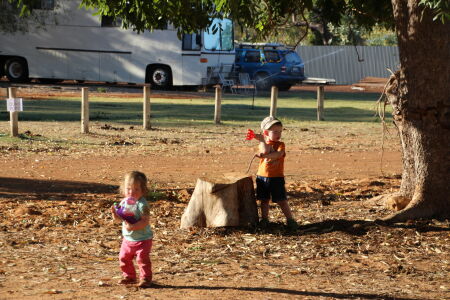